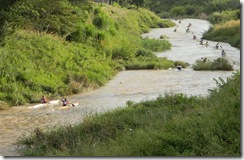 I’m not a morning person. Let me say that again, I am not a morning person. I have never believed that the early bird enjoys his worms as much as the late bird enjoys his sleep. Perhaps the morning is the best time of the day; I wouldn’t know. I might be up early enough for any number of reasons (usually to get ready for work) but that doesn’t mean I’m awake enough to appreciate anything.

Thursday was no exception. I got up before five thirty (five twenty-five to be precise), dressed, made tea, and prepared lunch sandwiches; fortunately these are activities that can be done quite adequately in a semi-comatose state, so one doesn’t actually have to wake up. I then drove into town (passing along the way an appalling number of runners out and about, busy doing what runners tend to do at such unearthly hours) and made my way down to the banks of the Umsindusi river for one of the toughest canoe marathons in the world, the Dusi Canoe marathon.

Oh, no, don’t be silly. I wasn’t going to take part. I was having breakfast on the bank while 1600 or so paddlers made their way in K1s, K2s and even K3s down to Durban on the river. Sheer madness I know, but the breakfast was good and the Dusi is an iconic Pietermaritzburg race (along with

the Comrades Marathon). I also had three nephews, a brother-in-law, and a number of friends taking part, and my company has naming rights for a weir about four kilometres from the start. Breakfast was on the house. I prefer brunch myself, but this was an opportunity, so there I was. And here are the pictures—some of them. 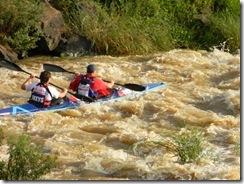 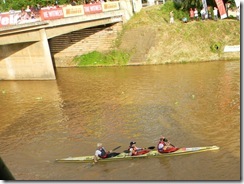 On Monday I’ll tell you a story my sister told me while seconding her husband.

Filed under General Writing, The Dusi

One response to “The Dusi Canoe Marathon 2011 Pictures”