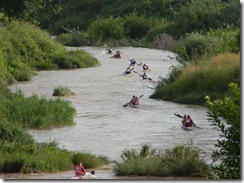 The Dusi Seconds have a hero. The Seconds are themselves the unsung heroes of the Dusi Canoe Marathon. They are the wives, girlfriends, boyfriends and husbands who spend hours next to rivers in all sorts of weather. They wait anxiously for their loved ones to reach them, handing out sympathy and sustenance, before packing children and baskets back into their cars and worming their way through the tangled mess of traffic on narrow roads, to the next seconding point.

Heaven help them if they’re late. If they’re lucky their paddler will stop and rest and wait for them. Otherwise he or she will paddle on to the next stop. The Second, however, won’t know that their charge has gone, and is compelled to wait. Without cell phone contact there is little hope that they will reconnect until the end of the day when, no doubt, some ’words’ will be exchanged.

On Day One of the 2011 Dusi, on the Bishopstowe Hall road, a couple of minor miracles took place. The Seconds were not allowed to park in the fields they have used before, near the top of Pine Tree Portage. They were forced to park nearly two kilometres away and walk. The only vehicles allowed on the road were those of the local farmers. A visiting Second from Mpumalanga, who was seconding her husband, said that, as she and her sister-in-law were walking down from her car, a local farmer stopped in his loaded two-seater and allowed them to catch a ride on his tailgate. They were immensely grateful, not only for the energy saved, but because her husband and his K2 partner appeared within five minutes of their arrival. Without the ride the Seconds would never have made it.

After providing their paddlers with encouragement and sustenance, the Seconds began the walk back to their car. A local farmer’s wife stopped. Her open bakkie was packed with weary Seconds but they managed to squeeze in two more. At the top they tumbled out, immensely grateful to the local angel. Having unloaded all the passengers, instead of travelling on to town, the angel in disguise turned her bakkie round and went back the way she had come. “What’s she going that way for?” our visitor asked another Second who had also hitched a ride. “She’s going to fetch more Seconds,” was the reply.

A true Second’s Second, who can rest well, blessed with the grateful thanks of numerous Seconds who legs are not quite as weary as they might have been, and who have a story to tell of love and kindness on the river.

(This artical was published in The Witness on Monday, 21 February 2010)

Filed under Community, The Dusi

I’m not a morning person. Let me say that again, I am not a morning person. I have never believed that the early bird enjoys his worms as much as the late bird enjoys his sleep. Perhaps the morning is the best time of the day; I wouldn’t know. I might be up early enough for any number of reasons (usually to get ready for work) but that doesn’t mean I’m awake enough to appreciate anything.

Thursday was no exception. I got up before five thirty (five twenty-five to be precise), dressed, made tea, and prepared lunch sandwiches; fortunately these are activities that can be done quite adequately in a semi-comatose state, so one doesn’t actually have to wake up. I then drove into town (passing along the way an appalling number of runners out and about, busy doing what runners tend to do at such unearthly hours) and made my way down to the banks of the Umsindusi river for one of the toughest canoe marathons in the world, the Dusi Canoe marathon.

Oh, no, don’t be silly. I wasn’t going to take part. I was having breakfast on the bank while 1600 or so paddlers made their way in K1s, K2s and even K3s down to Durban on the river. Sheer madness I know, but the breakfast was good and the Dusi is an iconic Pietermaritzburg race (along with 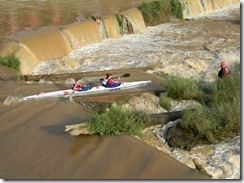 the Comrades Marathon). I also had three nephews, a brother-in-law, and a number of friends taking part, and my company has naming rights for a weir about four kilometres from the start. Breakfast was on the house. I prefer brunch myself, but this was an opportunity, so there I was. And here are the pictures—some of them.

On Monday I’ll tell you a story my sister told me while seconding her husband.

Filed under General Writing, The Dusi